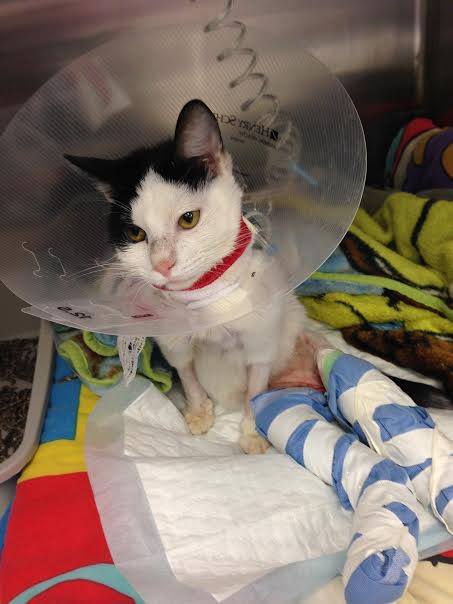 Prior to moving to Rochester, Bowser’s owner Casmir reported that his pet was a victim of animal cruelty after he had stayed with friends who Casmir trusted as caregivers. When returned to Casmir, Bowser’s hair started falling out, and his paws, legs and tail became swollen and inflamed.

Casmir sought treatment in Brooklyn at an emergency animal hospital. They determined that Bowser had suffered severe burns caused by scalding water. Casmir then brought Bowser to Rochester’s emergency hospital for further care and bandage changes. He was told by the veterinarians that Bowser needed to be hospitalized. He lost a lot of skin on his legs and feet and had suffered extensive tendon damage to his hind legs.

Bowser’s family was determined to give the small kitten a fighting chance, and they immediately reached out to the community for support. Bowser received a grant from Rochester Hope for Pets, and through personal fundraising efforts, donations in support of his care came in from around the world. Bowser received the surgery and skin grafts needed to repair the damage to his tendons.  Bowser still has a very long road to full recovery, but he is getting stronger every day.