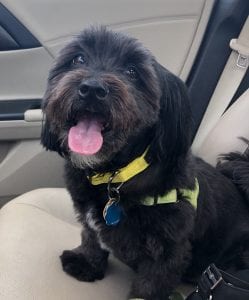 “Our family adopted Griffin in November of 2016. We fell in love with him immediately. When Griffin was adopted, he had a small air pocket under his chin. Three years later this air pocket was a palmful and determined to be a ruptured salivary gland that was filled with saliva. He needed a surgery that was beyond what our family was prepared for. We held a garage sale and raised a small amount of funds. We hoped we could put the surgery off until next years tax return came in. I started waking up to Griffin coughing in the middle of the night. Knowing we could no longer wait, I reached out for help. Through the kindness of many people we were able to bring the cost down and have Griffin’s surgery. His surgeon was successful and Griffin has healed well.” – A recent award recipient

Thanks to Elanco for making this Tail of Hope possible!