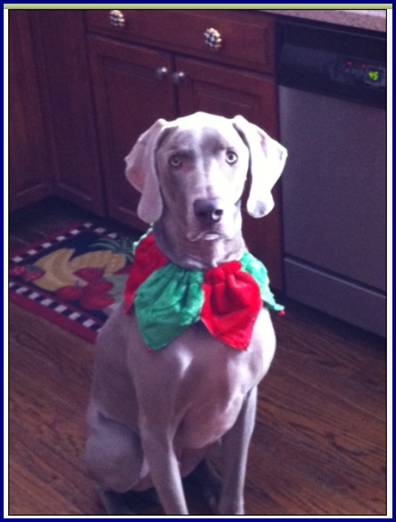 This is Oliver. Sandra rescued the Weimaraner when he was four months old, and he has been by her side ever since. Sandra says that “he is my shadow.” One Sunday, when Sandra got up to go to the kitchen, her “shadow” got off the couch to follow but started gagging. Sandra knew something was wrong. She let him outside for some fresh air but couldn’t get him to come back to her. He kept trying to lie down and was clearly in distress. When he finally came in, Sandra could feel that his abdomen had doubled in size, which she knew was in indication of bloat.

After rushing Ollie to the emergency animal hospital, it turned out that not only did he have bloat, he had gastric dilatation volvulus, or “twisted stomach,” and without surgery he would have to be euthanized. The veterinarians said he would make a full recovery with surgery, although it would be quite costly. Ollie had been with Sandra for seven years; he was her family. She decided to do whatever it took to save his life. She agreed to let them operate, and even though she knew it would be a tight financially, it was never really a question in her mind to save him.

Sandra contacted Rochester Hope for Pets to help with the cost of the surgery, and the grant she received lessened the financial burden. Ollie made a full recovery and is back to being the amazing dog he had always been. In Sandra’s words: “I can’t imagine my life without him and wasn’t ready to say goodbye to him. While I may have rescued him from the shelter, I honestly think he rescued me. I may have agreed to the operation that saved his life, but the way I see it, I was just finally returning the favor.”