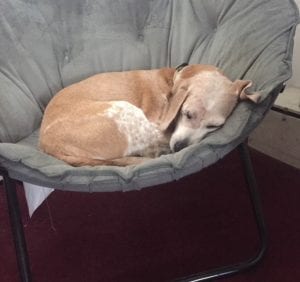 “I got Sally in June of 2009 as a foster soon after my beloved basset Hannah (age 13) passed away suddenly from hemangiosarcoma. Sally was due to be euthanized in a facility in West Virginia and was on her last day. I was living in Baltimore at the time and someone said they would bring her to me. She was 11lbs (currently 30lbs), had recently had puppies, had infected eyes, worms, was unspayed, positive for ehrlichiosis, covered in ticks and fleas and anemic.  But she was the sweetest little thing and followed me from room to room and slept next to me.  I did try to find her a home but was unsuccessful and after some time I finally admitted that I was a failed foster and formally adopted her.

She has been with me through the death of my 16 year old dog Katy soon after I moved back to Rochester, and the subsequent adoption of her sister, a basset mix named Sassy. She has also been there for me when I became disabled due to a genetic medical condition that is progressive, through my multiple surgeries and hospitalizations, and severe financial difficulties as a result.

Sally recently began experiencing right eye irritation that evolved into bleeding into her eye that was diagnosed as a mass or tumor that required enucleation. A few weeks before her surgery, Sassy was rushed into Emergency Vets with vestibular disease and required overnight treatment, medication, blood work, and a lot of care. This was unexpected. Thankfully she has almost completely recovered but due to a fixed income on disability there is no way I could pay for Sassy’s care and Sally’s surgery – which are being funded by Care Credit and other sources. I am so grateful for the Rochester Hope for Pets gift donation. I don’t think I could have afforded Sally’s surgery otherwise. And quite honestly Sally and Sassy help me get up in the morning and get out of bed – even on days when I am in severe pain.”

Thanks to donors like Javen Construction, we’re able to help pets like Sally. Please consider donating today so we can help even more animals.